The answer to this question should be obvious – the awarding organisation whose qualification is being awarded. But the qualifications market in England has evolved over many years to a point where responsibilities have sometimes become blurred.

In part this simply reflects the interplay of supply and demand – learners want to take qualifications at their convenience and, in general, users of qualifications want outcomes swiftly. The market has responded in some cases by allowing centres (training providers, schools and colleges) to essentially award qualifications on behalf of awarding organisations under the broad heading of ‘direct claims status’ (DCS). However, often the need for ‘on demand’ or ‘roll-on/roll-off’ assessment in certain qualifications can be in tension with the need for awarding organisations to maintain standards in their qualifications, and we have identified some significant areas of weakness in recent years that, if left unchecked, could undermine public confidence.

While DCS can be operationalised in a way that ensures awarding organisations maintain appropriate control, it does not comply with our current rules and, more importantly, we have identified a wide range of poor practice too. By way of example, at one end of the spectrum we have seen a lack of documentation between some centres and awarding organisations. It may be that processes are well understood between parties, but without appropriate controls there is the potential for things to go awry, either unintentionally or deliberately. More concerning are cases of external verifiers stating that candidate work is of the appropriate standard – triggering certification – only for awarding organisations to have reviewed it as substandard. What is the appropriate response in such cases? Should all learners at that centre be stripped of their qualification? It may be difficult to say. Then there are the most egregious cases, where we have found awarding organisations to have no record of who has received their qualifications, or data on which to determine whether certification was appropriate.

Early this year we reflected on the body of evidence we had accumulated from audits, investigations, event notifications, whistle-blower disclosures and stakeholder engagement, and we proposed some changes to how we regulate the controls awarding organisations have over centre assessment judgements. We worked with awarding organisations and others, including through a formal policy consultation, to develop a workable approach. We’ve now announced our decisions and are proposing to put rules in place which will require every awarding organisation we regulate to introduce Centre Assessment Standards Scrutiny (CASS).

The chart below summarises the decisions we expect awarding organisations to make. It indicates that they may consider moderation, which requires them to check the results of each group of learners before they are issued, to be the most appropriate approach for some qualifications (beyond those such as GCSEs, A levels and Technical Qualifications within the new T Levels, where it will be compulsory). Then there are a range of other forms of scrutiny, which could take place before or after results are issued on a periodic basis, that they may consider more effective in other cases. The most effective approach could vary depending on the qualification itself, or the centres delivering it, and the controls could change over time based on identified risks. 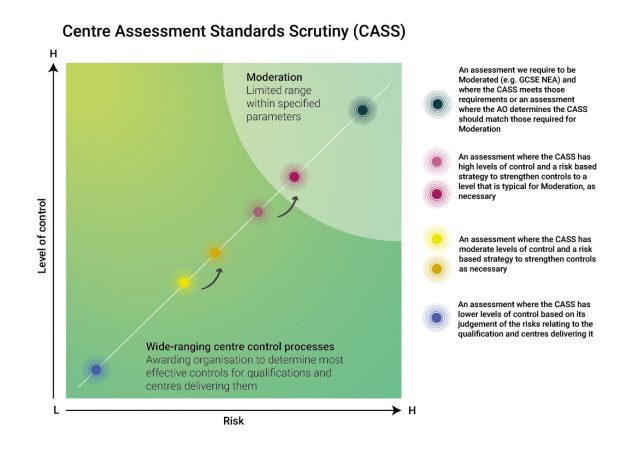 All awarding organisations will be required to introduce Centre Assessment Standards Scrutiny processes by no later than September 2021, although we would expect awarding organisations to be working towards meeting them sooner than this where possible. Before then, we are consulting on the precise wording of our rules and guidance necessary to implement this approach. If you’ve got views, then do please let us have them by reading and responding to our technical consultation. You might also want to read our guide on what these changes mean for centres.

These changes will help ensure that awarding organisations have an appropriate level of control over the awarding of all of their qualifications.  Accountability will sit in the right place – so that everyone can trust that students' awards provide an accurate reflection of their skills and knowledge in the subject and performance in assessments.