Last summer we had new 9 to 1 GCSEs in three subjects – English language, English literature and maths. This year they are joined by another 20 new GCSEs (see image below, click to enlarge). This means that many students (though not all) will receive entirely 9 to 1 grades for their GCSEs this summer. 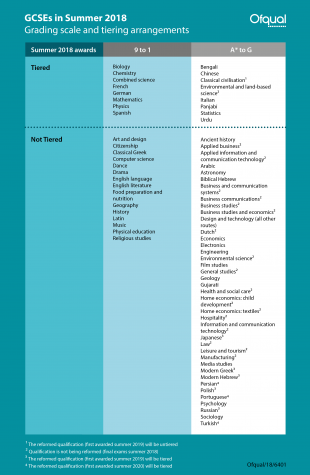 As we get closer to results day, exam boards will be working with their senior examiners to set grade boundaries on this summer’s papers. This is not done until after marking has taken place so that the grade boundaries can take account of how demanding the papers were.

Here are some key points to remember about grade boundaries this summer.

Boundaries in 9 to 1 tiered subjects

Maths, the sciences (biology, chemistry, physics and combined science) and modern foreign languages (French, German and Spanish) are tiered. In the new GCSEs, grades 5 and 4 are available on both foundation and higher tiers. There is also a narrow ‘safety net’ grade 3 on higher tier. Previously grades C and D were available on both foundation and higher tier, and there was also a narrow ‘safety net’ grade E available on higher tier, for those who just missed a D. So, the overlap of grades between the two tiers is higher up the grade scale in the new GCSEs. We’ve seen in maths that this change has led schools and colleges to enter more of their students to the foundation tier because of the more demanding content on the higher tier.

Where subjects are tiered, exam boards must include some ‘common questions’ – questions which are the same on the foundation and higher tier papers – to help them align standards between the tiers. The assumption here is that a student will perform similarly on those common questions, regardless of the tier for which they were entered. As such, a student who might expect to get a grade 4 on the foundation tier, would also expect to get a grade 4 on the higher tier. There is more information on how that works here.

What does that mean for grade boundaries on the two tiers? Last year, we saw some concerns about the grade 4 boundary on higher tier maths. We explained the detail behind that. Maths is a little different from sciences and languages in that we have rules about the proportion of marks to be targeted at particular grades. There are no similar rules for languages and sciences, because the content is not targeted in the same way. But, just as in maths, the higher tier papers in languages and sciences are designed to be more challenging than the old GCSEs, so that the very able students can show what they can do. Grade 4 is the lowest key grade on the higher tier, so it will tend to be set at a relatively low mark, compared to grade 7 or grade 9. But that doesn’t mean there’s anything wrong with the papers. And students can have confidence in those grades.

Grade 9 is not the same as the old A* grade. It’s a new grade, designed to recognise the very best performance. So, in every subject there will be fewer grade 9s awarded than A*s in the old GCSEs. For the 20 new GCSEs this summer, grade 9 will be set using the ‘tailored approach’ formula, and there is more detail on that here. For English language, English literature and maths, exam boards will use predictions to carry forward the grade 9 standard set in 2017, in the same way that they use predictions at grades 7, 4 and 1.

Those predictions, and the formula for the new subjects, will use only 16-year-olds matched to their Key Stage 2 prior attainment. So, if you’re worried that teachers or journalists – like the three BBC Breakfast presenters this year – taking these new qualifications, for whatever reason, might take grade 9s from the students, that won’t happen. It could be that every maths teacher (and journalist) in the country entered new GCSE maths one year, but they could all be awarded a grade 9 (provided they scored enough marks) without affecting the number of grade 9s awarded to 16-year-olds.

GCSE combined science is different from other GCSEs as it’s a double award (worth two GCSEs); it assesses two GCSEs’ worth of content, and so it has a double grade to reflect that. And because it’s a double grade, we thought it was fairer to have 17 grades, running from 9-9, 9-8, 8-8 through to 1-1. So if a student just misses a grade 5-5, they will get a 5-4. For example, if they were taking two separate science GCSEs, they would still achieve grade 5 in chemistry even if they just missed grade 5 in biology, so we think the same should apply in combined science.

Across all subjects, grade boundaries will be set this summer to ensure that students this summer are treated fairly, and are not disadvantaged by being the first to sit new GCSEs.