As we approach the completion of the reforms, there are some key things to note about this year’s students:

Our perceptions survey tells us that understanding of the new grades amongst universities and employers is good, and we will continue with our work to remind them that from now on they should expect to see large numbers of students applying to them with the new GCSE grades and how they relate to those in the previous qualifications.

Our graphic lists all the qualifications that are being awarded for the first time this summer. A small number of reformed foreign language qualifications (which are taken by very few students) will be awarded next year, when the entire process will be complete. 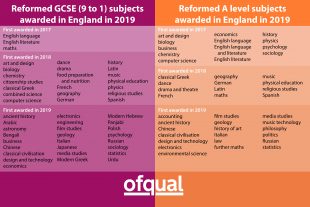 As has been the case as all the new GCSEs and A levels have been introduced, we will make sure that exam boards carry forward grading standards established in the old qualifications to the new ones when they are first awarded. We expect them to rely heavily on statistical evidence to do this, using the expertise of their senior examiners to check if the grade boundaries that the statistics indicate are appropriate.

In the new A levels, this means that, provided the 18-year-old cohort taking a particular qualification is similar to that of previous years in terms of their GCSE results, national results in the subject in 2018 will look similar to results in 2017 in that subject.

In the new 9 to 1 GCSEs, exam boards will use predictions to anchor standards to the legacy A* to G GCSEs. This means that, if the 16-year-old cohort taking a particular qualification is similar to that of previous years in terms of their key stage 2 attainment, the proportion of students who achieve grade 4 and above in that subject will be similar to the proportion that previously achieved grade C and above. The same principle applies to grade 7/grade A and grade 1/grade G.