Students’ practical skills in A level science courses are now assessed in two ways: indirectly using questions in written examinations and directly through teacher observation and assessment. The latter results in a ‘practical endorsement’ grade for each student (Pass/Unclassified) that is reported alongside their A level grade (A*-E).

These new assessment arrangements are intended to promote frequent practical work that is closely integrated with the subject content and covers a breadth of skills. When we consulted on this change in 2013, some stakeholders expressed concern that the new approach may have the unintended consequence that schools would treat practical science as less of a priority and so students’ practical skills would decline.

Studying the effects of reform

I am leading on a major programme of research to explore the effect of the reform on the teaching and learning of science practical skills. In one study I wanted to measure and compare the practical skills of two groups of students:

To achieve this, I worked with science subject experts to develop a ‘Practical Skills Measure’ (PSM) for each science subject (biology, chemistry and physics). The PSM requires students to complete 5 or 6 ‘hands on’ practical tasks while being observed and assessed. Over the past two years (pre and post science A level reform) about 1,750 new undergraduate students from 15 university departments completed a PSM within their first few weeks at university.

What have we found so far?

For biology, the post-reform students outperformed the pre-reform students, indicating that their practical skills were somewhat stronger. This was the case even when the A level grades of the students were taken into account.

Across the 3 science subjects, there is no evidence to suggest that practical skills have declined as a result of the changes. Though there are variations between the individual practical tasks, there was no significant overall difference between the performances of the pre-reform students and the post-reform students in either chemistry or physics.

Participating students also responded to a questionnaire about how frequently they had done practical work during their A levels and how confident they felt about conducting it. Again, the results are encouraging. Overall, the post-reform group reported doing practical work more frequently and also feeling more confident about undertaking it.

Frequency of practical activities during A level 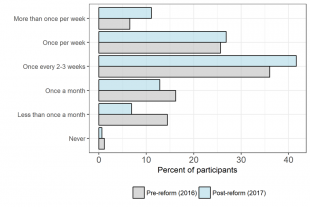 Participant responses to statement: ‘I feel confident about carrying out practical work’ 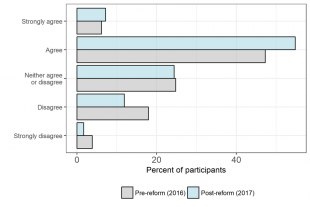 Reasons to be optimistic

The findings from this study, alongside those from our interviews with teachers, are a reason for optimism. The evidence suggests that students' practical skills have not declined following the reform (and have actually increased in biology). Students also appear to have been doing practical work more frequently, and they report that they are more confident doing it.

If you want to know more about the research, Papers 1, 2 and 3 of the study are here.

A note of caution

It is important to be cautious in our optimism for two reasons.

First, there are limitations to any research study and this one is no different. For example, we have only taken a sample of the population of students who take science A levels – for research of this type it is almost impossible to obtain a sample which perfectly represents the population as a whole.

We will continue to monitor and evaluate the effects of the reform over time.